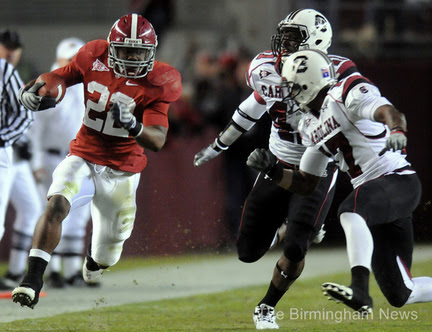 The Birmingham News has a news story on Alabama's Heisman hopeful Mark Ingram. Touting his multiple athletic prowess, the story proudly states he has bowled a 248 and shot a round of 69 on the golf course.

Well, bowlers will tell you that this is not equivalent. Ask any bowler and he would tell you that he would rather have a 69 golf score than a 248. For me, it is the old saying of "a bird in the hand is worth two in the bush." With the 69 being the hard to collect 'two in the bush,' most bowlers see 248 scores on some league nights like leaves falling off a tree.

I know that some hero worship by local sports media is expected sometime, but this local story is a little over the top. I am not the only one to see it as one on-line commenter to this story added more parody:

He's the only known specimen to win 3 free games of putt-putt in one 18 hole round. He sunk that hole-in-one so hard on #18 that came in and out of the windmill 2 times before sinking itself for the third time.

One must realize that this kind of reporting is the reason there is little, if any, bowling coverage in newspapers. Sundays during football season, your paper probably has its own Alabama section, Auburn section as well as the normal Sports section. As a former member of an Association publicity committee, this reason was given as to why there is no bowling coverage. There is no space available to it.

Posted by AlabamaBowling No comments: