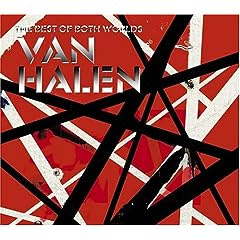 I just finished watching the GEICO Plastic Ball Championship on ESPN. Congratulations to Jeff Carter for his first PBA title. As a fellow child of the 80's, I was thinking the exact same thing about Carter's shirt before Rob Stone mentioned the Van Halen reference. How many of you had this image in your mind when you first saw his shirt?

I also enjoyed following the scoring on this tournament during the week and watching some of the 'older' guys like Brian Voss and Pete Weber excelling in this format. Maybe, if they had an open format to this tournament, we could see some of the guys who love the strong arc type roll, such as Wayne Webb or Del Ballard.

Other interesting observations:
Though it was the PBA Cheetah pattern, only half the volume of oil was used. You can easily blame the ball manufacturers for the price of bowling going up. With the advent of resin bowling equipment, proprietors have to use twice as much oil on the lanes as they did 20 years ago. Does that sound correct? Has lane oil properties changed in the past two decades? If not, then there is twice as much oil on the lanes today than the days of the Yellow Dot.

There was a mini-controversy about this tournament. Wes Malott refused to enter because everyone was forced to use the same ball? Come on. I agree with Woody Paige that Tiger Woods would still win many tournaments if everyone used wood drivers. I'm sure Malott is confident enough to know he can be competitive with any ball in his hand. How about this theory? Anyone's ball contracts cause an issue with participating in this tournamen where they could not throw the sponsor's equipment? Notice how they worked around this by holding the sponsor's bowling ball during their interview segments.

1993 was the last year that the champion used a plastic ball in the championship match. That was Walter Ray's 13th career title, his 7th in that calendar year. Did you notice how many revolutions he had during that clip? He, and Norm Duke, are the most versatile players out there in my opinion. Can anyone identify that particular bowling ball he used? I can't find that tournament on YouTube.
Posted by AlabamaBowling No comments:

Arnie Van Buren passed away on February 10, 2009 he was 92
Arrangements: Viewing will be Saturday Feb 14 at 12:00 at Elm Wood Chapel and the funeral will immediately follow at 1:00 pm at Elm Wood Cemetery.

Mr. Van Buren was a past treasurer for the Alabama State Bowling Association and was inducted into the Greater Birmingham and Alabama State Halls of Fame in 2002.

Posted by AlabamaBowling No comments:

Ron Kantowski of the Las Vegas Sun has an article about the USBC building and tearing down a world class bowling facility for the USBC Open Championships. He makes an allegory that uses bad facts.

"...is more remarkable than watching somebody named Earl or Walter Ray roll a 300 game on TV (there have been 14 of those, but none since 1999)"

Well, there have been 18 televised 300 games. The problem with journalism these days is there is no fact checking. If you don't check your facts for a news story, you might as well write for a blog. A quick Google search for "televised 300 games" led me to this web page. This page references a February 2003 Bowling Digest article which lists all of them at that time. Page 1 of this link shows only 14 televised 300 games. I'm thinking the article reporter stopped his research at this one page. So, his reference was 6 years out of date. The author did not check to see if there were any perfect games rolled since then. If you love finding journalistic mistakes in the print or television media, there are a multitude of political blogs that love to highlight this type of mistake.

No wonder, my children's teachers don't trust a lot of Internet references for papers.
Posted by AlabamaBowling No comments: