A New Kind of Bowling 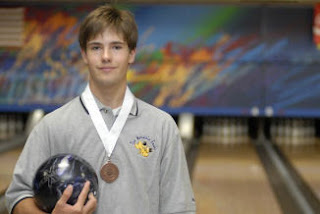 by Konnor George
On July 9, 2009, I arose at 3:30 a.m. to begin the 8-hour drive to Indianapolis, Indiana, host of the 2009 USBC Youth National Tournament. Little did I know of the experiences that awaited me at the Racing Capital of the world. Upon arrival, our crew quickly unpacked and relaxed after our long day of driving. Expo Bowl was our next stop that day. Practice was needed at the host bowling alley of the tournament. We did not want to bowl badly without a taste of what was to come the following day.

On July 10, 2009, another early awakening. After a quick breakfast, we arrived at Expo Bowl. Our team was fairly early; the alley was quite empty. We proceeded to get signed up, and then myself and 3 others: Justin Srygley, Matthew Gregg, and Clayton Whitfield, all posed in our Youth Nationals team photo. At 7:00 a.m., we began to bowl on our lanes. The rush of adrenaline as the “Star-Spangled Banner” could not be ignored. Bowling was in the air. If you loved bowling, and you were a competitor in it, there was no better place in the world to be at that moment than at Expo Bowling Lanes in Indianapolis, Indiana.

Blue #3 was the oil pattern of the tournament. First came relief to our minds; we braced for a sport shot. However, after the first ball, I, as well as my fellow teammates, discovered this pattern was just as difficult, if not more, than a standard sport shot. The lanes were drenched in oil, and no quick drying oil for that matter. Those three games were an awful sight to the eyes of all of us. 180 and 200 averages meant nothing as we bowled 140-170 on that ghastly pair of wet, oily lanes. At the end of our team event for the Youth Nationals, we arose with disappointed faces. Never had bowling let us down as it did that day. Fortunately, however, not all of our bowlers felt so down. Chris Stockard, who won the Pepsi Youth Tournament at Vestavia and rode with us to Indiana, shot a 631 with a 215-213-203 during the team event. And, as I have to admit, he had the privilege to ride his “high horse” that day. We could not let this blunder affect us. We had to shake it off, and move on. Singles and Doubles awaited us in the late morning of the following day. After a time of swimming, movie watching, and a late night, we braced ourselves for Day 2 of the Youth Nationals.

On July 11, 2009, a break came amongst us. Bowling began at 10:00 a.m.; few more hours of sleep. Upon arriving at Expo Bowl for a third time since our arrival, a fresh start beckoned us. It was a new day. We would be bowling our Singles and Doubles on a pair of used lanes. Simply adjust and keeping focused was the key to bowl well. At 10:00 a.m, my Doubles partner, Matthew Gregg, and I started to bowl. Our whole group experienced another wave of horror as we all bowled below our means. Low 400’s and 500’s was the forecast for our bowling series. More disappointment. “Great”, we were thinking. Singles followed on the pair to our right. “Alright”, I thought to myself, “One more chance.” I began to bowl in the Singles portion of the nationals. Bitter sweetness cast itself upon me in that set. It is true that I did bowl my highest series in my singles, but only with a 534 to call my best. Not a single 200 game thrown. However, they were plentiful. Justin Srygley, with his 130 average, bowled a 215. That I, with a 202 average, could not seem to do. Matthew Gregg bowled a 221 with a 180 average, Kellen Kling a low 200 with a 160 average, and Chris Stockard with a 213 AND 215 AND 203. And I, Konnor George, 202 average, not ONE 200 game. Only a measly 189 game to my name. I have never felt so pathetic than I did at that moment in time. I came with high hopes and bold determination, but crashed and burned in my attempt to bowl well. I just did not have it in me. My lack of focus and of adjustment was my downfall. “You need to be focused, relaxed, and prepared to bowl on the National level” is what I told myself. I only wish I could have followed that advice. Another night of relaxing and packing followed, as we prepared to leave Indianapolis.

At 6:30 a.m. on July 12, 2009, our crew packed up our Ford Explorer and began the 8-hour drive home. The USBC Youth Nationals were over. We had left our imprint upon the Nationals, and now the opportunity would be bestowed upon the bowlers of the following week. However, my experiences will last forever. I may not have bowled my best, but I surely learned a lot about bowling, and bowling at the National level. That is what counts. My bowling will be changed for all the better, and so much better than that, because of my 4 days in Indianapolis. Next year will be here soon, and I will be ready. My time of recognition and glory is within my grasp. I will take my poor, lousy bowling this year to learn. To plan. For next year, a brilliant set of games awaits. Look out 2010. Here I come!
Posted by AlabamaBowling No comments: 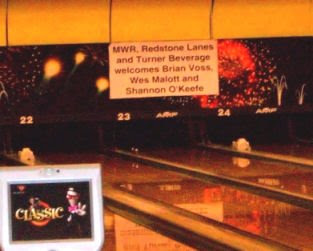 Only July 12, 2009, Redstone Lanes hosted the USBC program, Bowl Like The Pros. Scheduled to appear was Chris Barnes, Brian Voss, and Carolyn Dorin-Ballard. My dad and I went. No matter what your average, there is always a next level, there is always someone better, there is always a desire to improve. Upon entering the parking lot, we saw Brian Voss unloading equipment from his SUV. Shannon O'Keefe pulled in next to us. As she was not advertised to be there, I was thinking that more pros would be appearing. As we entered the facility, I realized what 'scheduled to appear' meant. However, I had no problems with the substitutes for the Huntsville event.

Brian Voss, while in the U.S. Army, had been stationed at Redstone Arsenal in the late 70's. He recounted stories of his time in Huntsville. He was the leader of the event and took charge of the clinic. After having everyone warm up for five to ten minutes, Voss started going over drills he wanted everyone to do. We all started with the one-step approach, a la the Tony Reyes trick shot. Then we did a two-step approach. Brian's point was no matter how different everyone's approach seems, most of the pros finish the same way as far as timing. During this time Shannon stopped on each pair and worked with each individual. Here she is giving some tips to my dad. 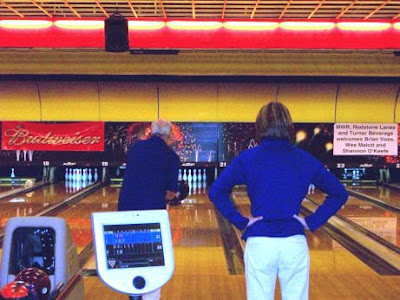 Wes Malott finally arrived as he had been in Indianapolis the day before. He was working with the youth during the Junior Gold championships. During each of the drills and individual coaching, there was a camera with laptop connections for bowlers to have their approach captured on video. A representative from Storm gave you a quick analysis. For $10, he would e-mail the video file to your e-mail account. As of this posting, I am still awaiting this file. I'm sure other software is needed to convert this video file from the proprietary camera capture software to a well-known format used by Windows Media Player, Quicktime, or Real Player.

What did I learn from this video? I learned that I am not a Gold or Silver coach. Egotistically, I thought I looked good. I could use a better knee-bend or armswing. As a matter of fact, I would like Shannon O'Keefe to teach me to have her armswing and finish. But, I was told that I need to work on allowing gravity to do its thing with my armswing. I am trying to 'control' my armswing. Watching the before and after videos, I couldn't tell the difference, but it sure felt different. Now, I have something to target my practice sessions. 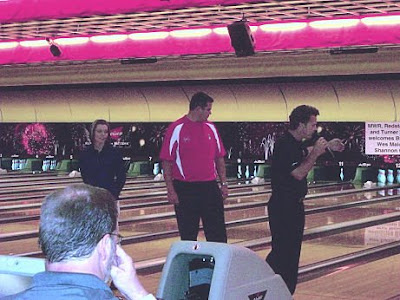 Near the end of our nearly 2 hour bowling practice/drill sessions, the three pros gave a lecture on reading lanes and making adjustments. While waiting on our lunch to be served, they had a Q & A session. The more interesting discussion was how Wes Malott's targeting scheme was something more unconventional than any other professional.

After lunch, an exhibition match involving the professionals and local celebrities was started. It involved a baker match mixing the pros and celebrities. Brian Voss was doing color commentary while bowling during the match. It was not that exciting as half of your bowlers looked like the typical Saturday night bowler. We did see all our pros throwing left to right on the lanes as I am sure the typical house shot involves more friction than their normal tournament shots.

What did I learn? I learned that these clinics are worth the money, no matter your average level. The pro will work with you at your level. I would recommend not being shy. When the coach or pro arrives on your pair, talk to this person. Ask questions. Have them watch you. Have them watch your correction to make sure you understand what the coaching tip. Take advantage of video tools or any other one-on-one opportunities. This is your time and money. Make sure you take advantage of it. Follow up with your local pro shop which offers certified coaching. Collaborate with them on your new knowledge. Let them work with you to continue your road to perfection. Everyone needs coaching...especially me.
Posted by AlabamaBowling No comments:

Looking back near the end of ABC's run of the Professional Bowlers Tour, one should have seen the end coming. Nearly all the commercials being run were of bowling products. Gone were the Quaker State oil and Miller Beer commercials.

The success of any show or other entertainment vehicle is measured in advertisement dollars. Obviously, with the large number of people who watch the Super Bowl, the networks charge high rates for commercial time. If professional bowling on television is to be a viable success, there must be companies willing to advertise on the programs. On ABC, there seemed to be nothing but Brunswick, Columbia, or Dexter commercials. Sure, that is targeted advertising, but bowlers buy Buicks just like golfers who watch Tiger Woods on TV.

With the new PBA on ESPN, we are seeing non-bowling products being advertised, which is a good sign. Now the bad sign. Must we see the same three commercials over and over? The GEICO commercials are clever. But they get old when you see them six times in a 90 minute telecast. I know the PBA sales staff is trying hard to get more sponsors. The more variety you see for commercials, the more successful the PBA.

The new PBA also wanted to make stars out of its bowlers. Seeing them in commercials endorsing non-bowling products is a good way to increase their visibility. WRW in Denny's commercials and the new Lumber Liquidators ad with Parker Bohn III are a good start. How about Chris Barnes drinking a Pepsi? Of course, ESPN uses them also for self-promotion. Remember all the coverage Pete Weber had under the persona of 'PDW'?


So, you can gauge the success of the PBA by watching the commercials. The more variety of products you see on the small screen, the more prize money, the more respect, and a better image for pro bowling should follow.
Posted by AlabamaBowling No comments: